THE COOK, THE THIEF, HIS WIFE & HER LOVER A Hidden Gem 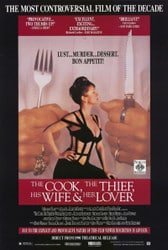 When it comes to classics, there is a handful that are everyone’s favorites and on the must-watch list of many. However, some like “THE COOK, THE THIEF, HIS WIFE & HER LOVER” fly under the radar and hence are considered hidden gems. The reason being that such movies are quite hard to come across unless recommended, have a quite intriguing title, a story plot to match, and would leave the viewers dissecting the plot for a deeper meaning.

The 1989 crime drama is based on the ongoing events in a high-class restaurant, Le Hollandais, over the course of multiple nights. The plot revolves around the events, interactions, and emotions between the four titular characters, i.e, the cook – Richard Boarst, the thief/gangster- Albert Spica, his wife – Georgina Spica, and her lover – Micheal. Every night, Albert Spica, accompanied by a group of thugs and his long-suffering wife Georgina, visits the Le Hollandais restaurant. Here, he has the cook (Richard) prepare lavish feasts for him, while he makes a display contrasting to what the restaurant represents by being loud, brash, and humiliating towards other patrons. One night, the gazes of Georgina and another regular (Micheal) meet and this sparks an illicit affair right under the nose of Albert. Their affair continues for many nights under the knowledge of the head cook. What follows is the effects and consequences of their affair being found out and Georgina going out to seek revenge due to the last straw.

The thief is a representation of how power corrupts. What seems to him showing his patronage over his favorite restaurant is actually elbowing into the ownership and rubbing everyone the wrong way. He is a loud, large, reprehensible criminal that gloats over others while relying on the muscle power of his henchmen to do the dirty work for him. He is a complete antithesis of a gentleman as he draws delight in humiliating others, beating & degrading his wife, and ill-treats the wait staff and the cook in the restaurant. Due to his boorish behavior, everyone holds a grudge against him, waiting to stick it to him at the opportune time.

Georgina is everything that someone on the receiving end of ill-treatment represents. She is ashamed of her husband and his antics yearns for the attention of someone who loves her, and someone who is on the verge of a breakdown emotionally. Her husband believes that he has bought her love and devotion by taking her out for shopping and dining at posh restaurants. The entire movie is her transformation from being someone of elegance and a nuanced taste to abandoning societal norms in pursuance of love and finally becoming the one to end her husband’s tyranny. Throughout the movie, the viewer empathizes with Georgina and may eventually term her revenge as poetic justice.

The cook can be termed as the opportunist who is greatly grey in the black and white character traits in the movie. He is someone who despises Albert for his boorish nature but is silenced by the business Albert brings. When he learns about the secret affair between Georgina and Micheal, he decides to exact revenge on Albert by allowing the restaurant staff to witness, aid, and abet the couple’s misdemeanors. Nearing the end of the movie, his fight against his ethics is clearly visible as he is approached by Georgina with a weird request.

A classic example of the moth drawn to the flame, Micheal is a bookstore owner who is one of the regulars at Le Hollandaise and is the lover of Georgina in later parts of the movie. He is the complete opposite of what Alfred is and this character trait attracts Georgina. He is aware of who Georgina is and the risk involved with having an affair with her but he goes ahead with the affair. On the revelation of their affair and being captured by Albert’s henchmen, Micheal’s fate plays a turning point in the story.

Why Is “The Cook, The Thief, His Wife & Her Lover” A Hidden Gem?

Directed by Peter Greenaway, the movie is a thought-provoking movie with believable characters and as the story progresses, the viewers start to care for each of the oppressed characters. The movie portrays basic human emotions through each of its characters. There is gluttony (Albert), lust (Micheal), deceit (Richard), and rage (Georgina). Colors are used in different instances for symbolism and certain emotions. The main dining hall is covered in red, communicating passion and blood. The kitchen and adjoining storeroom have hints of green indicating freshness, jealousy, vibrancy, and the shadows indicate secrecy. The contrasting whites of the bathroom communicate the starkness and sterile nature of their relationship.

Rotten Tomatoes gave the movie an 85% score based on 48 reviews, with an average rating of 7.57/10. At a first glance, the movie is not for the faint of heart or weak of the stomach. Yet, by carefully studying the movie and understanding the vision of the director, you start to appreciate the small details and nuances of the movie.